The Democrats will go to any lengths to win the governorship and senate seat in Florida. And, there is one big reason they are reportedly pushing to count illegal aliens votes and are willing to break the law, specifically in Florida. It has to do with the 2020 presidential race. Enter Brenda Snipes, the Broward County Elections Supervisor who was just caught redhanded as President Donald Trump has had enough.

Something smells in Florida. Why is it every other county in Florida, including those hit hardest by the recent hurricane, have managed to get their votes in by the deadline — but not Broward and Palm Beach Counties? And, what do they have in common?

They are the biggest Democratic strongholds in a key state needed to win the presidency every four years. In fact, Brenda Snipes, Broward’s elections supervisor, is a known player of dirty pool. Governor Rick Scott, who is embroiled in this re-count, pointed to Brenda Snipes as “stealing the election” along with Democratic Party officials on the Sean Hannity show.

Gov. Scott also said, “They were not letting party officials review, when they were reviewing ballots. They didn’t report on time. … We still don’t understand how they went in these two counties and dramatically increased – another 93,000 votes were cast, or somehow they came up with 93,000 votes after election night.”

Now, not only are the Democrats finding 93,000 extra votes, seemingly out of thin air, but they are also asking that illegal alien votes count! How can this even be open for discussion?

The Federalist reports, “During review of provisional ballots to determine whether a recount is justified in the tight Florida governor, Senate, and agriculture commission races, Palm Beach County Supervisor of Elections Susan Bucher identified a voter as a non-citizen and declared that the ballot would not be counted.” 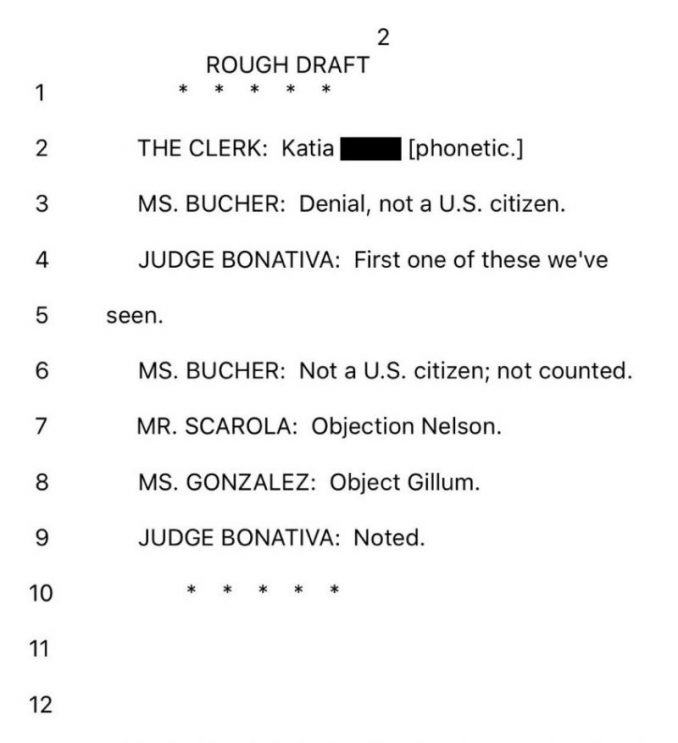 Chairman of the Palm Beach County Republican Party Michael Barnett attests to the validity of the transcript. He told The Federalist that several Republican lawyers and party officials heard the back and forth between the canvassing board and attornies from the Gillum and Nelson campaigns.

“I would think this is something we could all agree on — that non-citizens shouldn’t vote, but evidently that’s not the case with Democrats,” Barnett said. “It’s really sad that we are having to deal with this in a close election. It just goes to show the depths they will go to in order to win.”

Now, there’s more troubling news as that Broward County Election Supervisor was caught attending a service at New Olive Baptist Church yesterday, where the Democratic candidate for governor Andrew Gillum held his “Count Every Vote” rally. Yes, that’s right. The woman who is in charge of the re-count was spotted allegedly attending an Andrew Gillum rally.

Here is a photo that proves without a shadow of a doubt that #BrendaSnipes is a member of Mount Olive Baptist Church where Andrew Gillum held his "Count Every Vote" rally this evening where she was allegedly in attendance. @LauraLoomer #Save pic.twitter.com/gcTQlfF7Gx

Well, President Trump stepped in, posting, “The Florida Election should be called in favor of Rick Scott and Ron DeSantis in that large numbers of new ballots showed up out of nowhere, and many ballots are missing or forged. An honest vote count is no longer possible-ballots massively infected. Must go with Election Night!”

The Florida Election should be called in favor of Rick Scott and Ron DeSantis in that large numbers of new ballots showed up out of nowhere, and many ballots are missing or forged. An honest vote count is no longer possible-ballots massively infected. Must go with Election Night!

So, why are the Democrats so focused on Florida when there were many tight races? And, why are they willing to break the law in a feverish plot to steal the Florida election?

Out of those six, the one state which has not been dominated, voting for Democrats, is Florida. Trump needs Florida to win in 2020. If the state is controlled by Democrats, guess how the presidential race will come out in the Sunshine State? If Gillum is governor, there is no doubt he will play dirty. He already has a history of scandal.

So, all Americans need to be aware of what is at stake in Florida. We must pass this information on and make as much noise as possible. We all know what is really going on, so let’s back up the president and demand they stop the recount. Trump said it best: “An honest vote count is no longer possible.”

The content on The Liberty Times expresses a personal opinion, advocates a point of view (e.g., on a social or political issue), or is self-promotional. For the purpose of fact-checking, it should be rated as Opinion according to Facebook policy.

About Rebecca Diserio, Opinion Columnist 61 Articles
Rebecca Diserio is a conservative writer and speaker who has been featured in numerous high profile publications. She's a graduate of St. Joseph High School in Lakewood, CA and worked as a Critical Care Registered Nurse at USC Medical Center. A former Tea Party spokesman, she helped manage Star Parker’s campaign for US Congress and hosted a popular conservative radio show where she interviewed Dr. Alveda King, Ann Coulter, David Limbaugh, and Michelle Malkin. A police widow, she resides in Southern California.

Join Us In Trump Town

Tom Arnold is in deep trouble. The 59-year-old actor threatened President Donald Trump with bodily harm. Arnold is a rabid Trump-hater, but this time he went too far referring to the president’s severed head, but that’s not all. The freaked-out comedian was caught on video as the Secret Service showed up at his door, and they proceeded to tell Arnold why celebrities are now in their crosshairs. You’ll love this. […]

Michelle Obama continues on her international book tour, and she just made a stop at the Boston Garden. The crowd listened as the former first lady once again turned her attention to President Donald Trump, which is interesting since her memoir, Becoming, has little to do with the president. Michelle laughed as she trashed Trump’s inauguration, taking cheap shots as she used the race card. […]

Department of Homeland Security Secretary Kirstjen Nielsen has had enough of the lies being circulated about the migrant caravan currently camped in Tijuana. She decided to air the ugly truth about these migrants, silencing President Donald Trump’s haters in the process. POTUS was right all along! […]

On Sunday, U.S. agents deployed tear gas as hundreds of Central American migrants stormed the border near the San Ysidro port of entry in San Diego. It wasn’t long until bleeding-heart liberals began decrying the “evil” Trump administration for its “cruel” reaction to the migrants. However, an Army veteran has since revealed exactly what it’s like to be tear-gassed, silencing President Donald Trump’s critics. […]

CNN continues its legacy of bad reporting after two CNN employees posted a viral photo on Twitter. Their eagerness to push their left-wing narrative had them sharing a picture meant to smear Saudi Arabia and President Donald Trump. Quickly, people pointed out one obvious mistake. This is one embarrassing blunder for the “respected” news network. […]