CNN continues its legacy of bad reporting after two CNN reporters posted a viral photo on Twitter. Their eagerness to push their left-wing narrative had them sharing a picture meant to smear Saudi Arabia and President Donald Trump. Quickly, people pointed out one obvious mistake. This is one embarrassing blunder for the “respected” news network.

Time and again, the network has been caught sharing obviously false information. Their contributors are quick to slam the president and his administration. It wasn’t that long ago, that CNN White House correspondent Jim Acosta was kicked out because of his behavior.

It’s clear that CNN’s bias against conservatives — and especially President Trump — has led them to say and do almost anything to make him look bad. Honest journalism no longer matters. They are so hellbent on opposing the President of the United States, they have pushed the most insane ideas.

More often than not, they have humiliated themselves. You’d think Americans would have given up on them. They’ve long burned through the “three strikes and you’re out” rule. How many strikes do they have by now? Too many to count.

But instead of learning from their mistakes and trying to be better, CNN doubles-down on the fake news. Their reporters continue to spread information that makes Trump look bad — even before they can verify its accuracy.

Just take a recent tweet shared by two CNN reporters. The goal was to malign the Crown Prince of Saudi Arabia — an ally to President Trump. Instead, these “journalist” got a lesson in spotting badly photoshopped images.

Is this an apple or a banana? That’s the question we’re all asking after two CNN reporters fell for an obvious photoshop showing a Tunisian being hoisted into the air by protesters while appearing to hold a chainsaw. 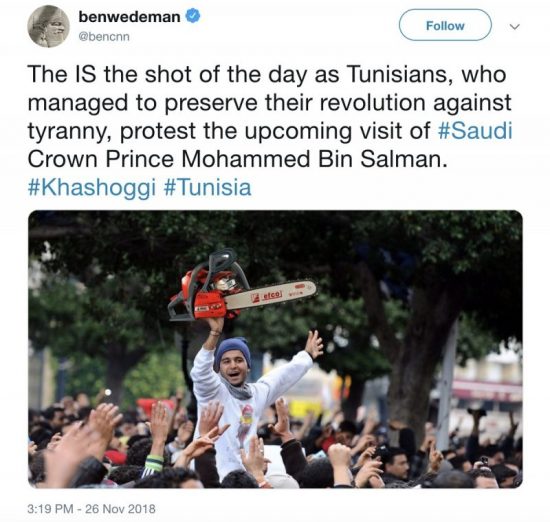 But it appears CNN’s chief national security correspondent, Jim Sciutto, was unaware of the fake, as he retweeted Wedeman’s tweet, adding “wow.” Sciutto has since deleted his tweet without explanation after leaving it up for an hour.

As The Daily Caller’s Peter J. Hasson noted, the image is actually from 2011 and contained no chainsaw — it was a small cage with a Tunisian flag on it. [Source: Daily Wire]

Ouch! This is pretty embarrassing. Anyone with, you know, eyeballs can see that it was a photoshop. A human being can’t hold up a heavy chainsaw like that, with just one hand. Unless the chainsaw was made of cotton.

But these two professional journalists didn’t stop for a moment to think about that, before posting it to their followers online. They were so eager to make Saudi Arabia look bad (and by extension, President Trump) they humiliated themselves.

The liberal media has gone to war with Saudi Arabia ever since the death of Jamal Khashoggi. They’ve blamed the kingdom for the man’s death. President Trump refused to cut ties with Saudi Arabia over the controversy, making the Trump-hating media even angrier.

President Donald Trump released a statement on November 20 saying the U.S. would not end its relationship with Saudi Arabia over the death of one man. This, naturally, angered U.S. media outlets that already hate Trump even more. Left-leaning outlets have already pounced on any information that made Saudi Arabia look bad, leading to retractions. In October, Reuters had to retract an article claiming the Saudi consul in Istanbul was fired and being investigated after it fell for a fake news website modeled to look like an old version of the Saudi online newspaper Sabq. [Source: Daily Wire]

It’s pretty sad to see the American media meltdown like this. They are so self-absorbed, so full of hate for the president, that they’d say or do anything to make him look bad. It doesn’t matter if what they are spreading is even accurate.

Is it any wonder why millions of Americans call them fake news? CNN anchors are shocked when people at Trump rallies shout “CNN sucks!” But can you blame them? These “reporters” are so bad at their jobs, they can’t spot a laughably bad photoshop.

Here are a few more. Let’s see if CNN can spot the alterations.

They love #PBJ, too. pic.twitter.com/Gnf39X9rGJ

The IS the shot of the day as Tunisians, who managed to preserve their revolution against tyranny, protest the upcoming visit of #Saudi Crown Prince Mohammed Bin Salman. #Khashoggi #Tunisia pic.twitter.com/ix93Rrm1Z6

As the media continues to spread fake news, they erode whatever confidence is left among Americans. The free press is vital in keeping our society free from tyranny and abuse by the government. But our biased, pathetic, dishonest mainstream media have destroyed their credibility. Their liberal agenda has burned far too many bridges.

And when they spread obvious photoshops, calling them news, who will be left to believe them?

SHARE this if you are tired of CNN’s sloppy journalism!

The content on The Liberty Times expresses a personal opinion, advocates a point of view (e.g., on a social or political issue), or is self-promotional. For the purpose of fact-checking, it should be rated as Opinion according to Facebook policy.

Join Us In Trump Town

Tom Arnold is in deep trouble. The 59-year-old actor threatened President Donald Trump with bodily harm. Arnold is a rabid Trump-hater, but this time he went too far referring to the president’s severed head, but that’s not all. The freaked-out comedian was caught on video as the Secret Service showed up at his door, and they proceeded to tell Arnold why celebrities are now in their crosshairs. You’ll love this. […]

Michelle Obama continues on her international book tour, and she just made a stop at the Boston Garden. The crowd listened as the former first lady once again turned her attention to President Donald Trump, which is interesting since her memoir, Becoming, has little to do with the president. Michelle laughed as she trashed Trump’s inauguration, taking cheap shots as she used the race card. […]

Department of Homeland Security Secretary Kirstjen Nielsen has had enough of the lies being circulated about the migrant caravan currently camped in Tijuana. She decided to air the ugly truth about these migrants, silencing President Donald Trump’s haters in the process. POTUS was right all along! […]

On Sunday, U.S. agents deployed tear gas as hundreds of Central American migrants stormed the border near the San Ysidro port of entry in San Diego. It wasn’t long until bleeding-heart liberals began decrying the “evil” Trump administration for its “cruel” reaction to the migrants. However, an Army veteran has since revealed exactly what it’s like to be tear-gassed, silencing President Donald Trump’s critics. […]

CNN continues its legacy of bad reporting after two CNN employees posted a viral photo on Twitter. Their eagerness to push their left-wing narrative had them sharing a picture meant to smear Saudi Arabia and President Donald Trump. Quickly, people pointed out one obvious mistake. This is one embarrassing blunder for the “respected” news network. […]